Memory bandwidth in GPU means the speed at which data is transmitted or stored in the semiconductor memory by the processor, this processor works like the CPU one’s and assists the graphics card to provide better efficiency.

Graphics cards are essential devices that enable people to use computers and play games. They can be connected to a monitor, video projector, TV, or gaming console and are used in laptops, desktops, tablets, and mobile devices. When playing a game, you will need a graphics card to render the images on the screen. This will make the picture clearer and allow you to see the details of the game. 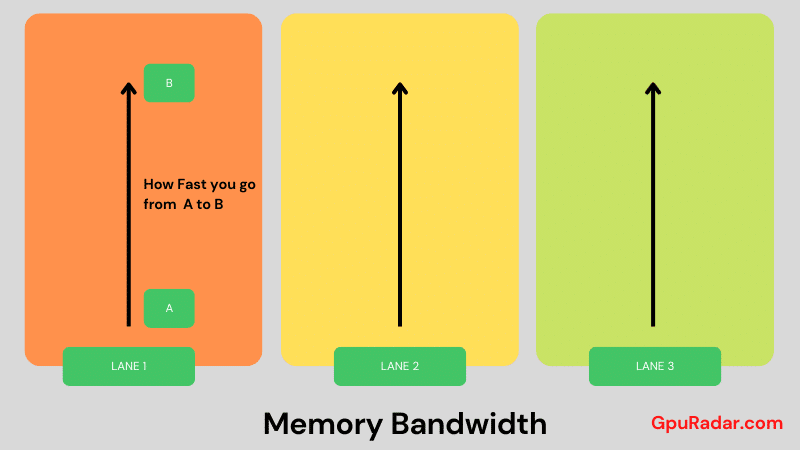 The above diagram shows the lanes of memory, the width (Lane1, Lane2, Lane3..etc) is known as Memory Buswidth. Memory Bandwidth tells us how quickly the data is transmitted from point A to Point B (it is an example), in reality, the data is transferred from one point to the GPU components, and the rate at which data is delivered and stored is called Memory Bandwidth of GPU.

It is important to focus on the usage and purpose of graphics cards, you can use them to solve complex algorithms, mining, animation, rendering, and gaming. Systematically, these GPUs act like the CPU, these cards contain VRAM to render images and videos on the screen with more clarity, thus helping gamers to improve AoE (Area of Effect) and DPS (Damage per second).

What is Memory Bus in GPU?

We will be happy to hear your thoughts

The purpose of making this website is to provide unbiased reviews of top-rated brands and products so that users can easily pick the top ones with ease and comfort. Graphics Cards with price history will help you to choose the best GPU at the best price, Keep visiting our website for more valuable information.

Just put your email address here, if you want to get in touch with us. You will be notified when new products will be added.